This has been the case for every version of Windows that I’ve used, from Windows 95 through to Windows 8 Release Preview. And Not just on my computer, on other’s too – I’m sure you’ve noticed this.

When you right click on a file, the Desktop or on a Folder, why does the “New” sub-menu take longer to display, than any other system-based menu?

I understand that it may have something to do with determining which Icons to display based on what listings should appear in the “New” menu, but still – there are other sub-menus that have the same functionality, yet appear instantaneously. 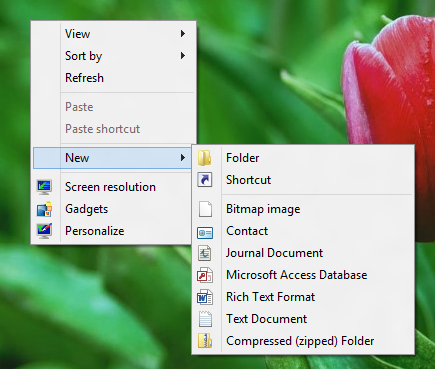 Those “other sub-menus” do not have the same functionality at all. Those other menus are all statically designed whereas the New sub-menu is dynamically generated.

What this means is that Tortoise SVN has predetermined what options should be on that menu well ahead of time and primed Windows with all the images and text and functions that need to be called from those menu options.

The New menu on the other hand has to scan the registry to find out what items need to have an option in the New menu, it has to go to the disk to find icons for those items and it needs to work out what to do when someone clicks on those items. The problem is that it has to do this each time you look at that menu because if you install a program then you might well expect new items to appear in that list at any random time.

Basically those menus are not the same and they are working on two different sets of assumptions. One is static and rarely changes, the other is dynamic and can change any time a program wants it to. Disk caching can make the New menu fast-ish, but that doesn’t make up for the fact it needs to do work before it shows you the list.