One of my computers was showing really bad graphics problems, not only in Windows but also in the BIOS. I replaced the graphics card and most problems went away – except the .LNK shortcut icons in Windows Explorer and on the desktop (see attached image).

What is causing this corruption, and how can I fix it? How do I get the icons to appear properly again?

It seems that the icon rendering itself is broken, not the actual ICO image. I tested this by choosing different icons for some of the shortcuts. The effect was a less damaged icon, but damaged nevertheless. The best case was like the center-left icon in the image: “Neu starten”. 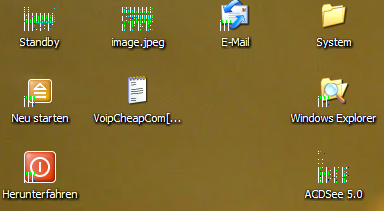 Its because the image cache was corrupt. It’s a file called Thumbs.db and its hidden. Select show hidden and system files in directory properties and then delete Thumbs.db in any folders with corrupt icons.