I have a chromecast, which streams video to my tv with about a two second lag. Audio streaming has not yet been implemented for the feature I’m using. The audio still comes out of my computer speakers, which is fine (I can redirect it to my tv’s speakers later), but still two seconds ahead of the video. All this to ask: how do I purposefully lag the audio coming out of my computer? I use both a Windows pc and a Mac, so an answer which applies to both would be much appreciated (though not necessary to answer). Any more specific questions about hardware will be answered in the comments section below. Thanks for your time.

here is a guide on how to achieve this.

Go to View->Options->Internal Filters->Audio Switcher and here you can change the delay: 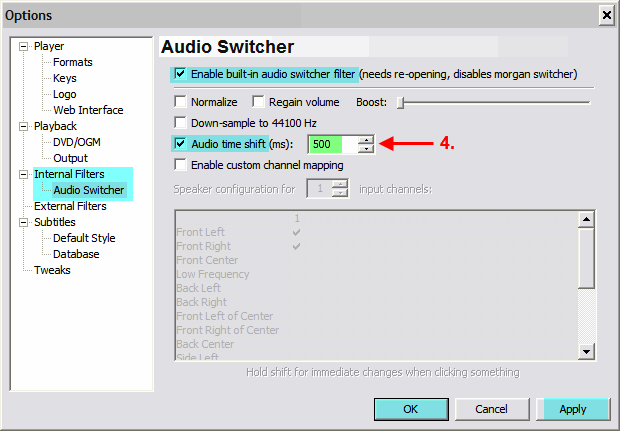 Your second option, which is for both windows and mac, is to use an audio delay plugin which I found here

A free piece of software called EqualizarAPO which offers system-wide control of your audio can also do this. Install the software, run the ‘configurator’ in the program folder, choose the sound sources to control with EqualizerAPO, reboot, run ‘peace.exe’ in the program folder, go to ‘effects’ then ‘delay’ and change to the value which works.

I don’t think it is also available for Mac though.

I’ve got a 200ms video delay through my DVI>HDMI cable. I don’t know why, but it doesn’t bother me; except that the sound comes out ahead. Delaying the sound fixed this for me.

EqualizerAPO really helped me out with this issue. Great program. I needed the explanation video from Pixelpoison though.