I have a problem – sometime yesterday, my hard drive appears to have been overwritten by something and then re-partitioned multiple times. 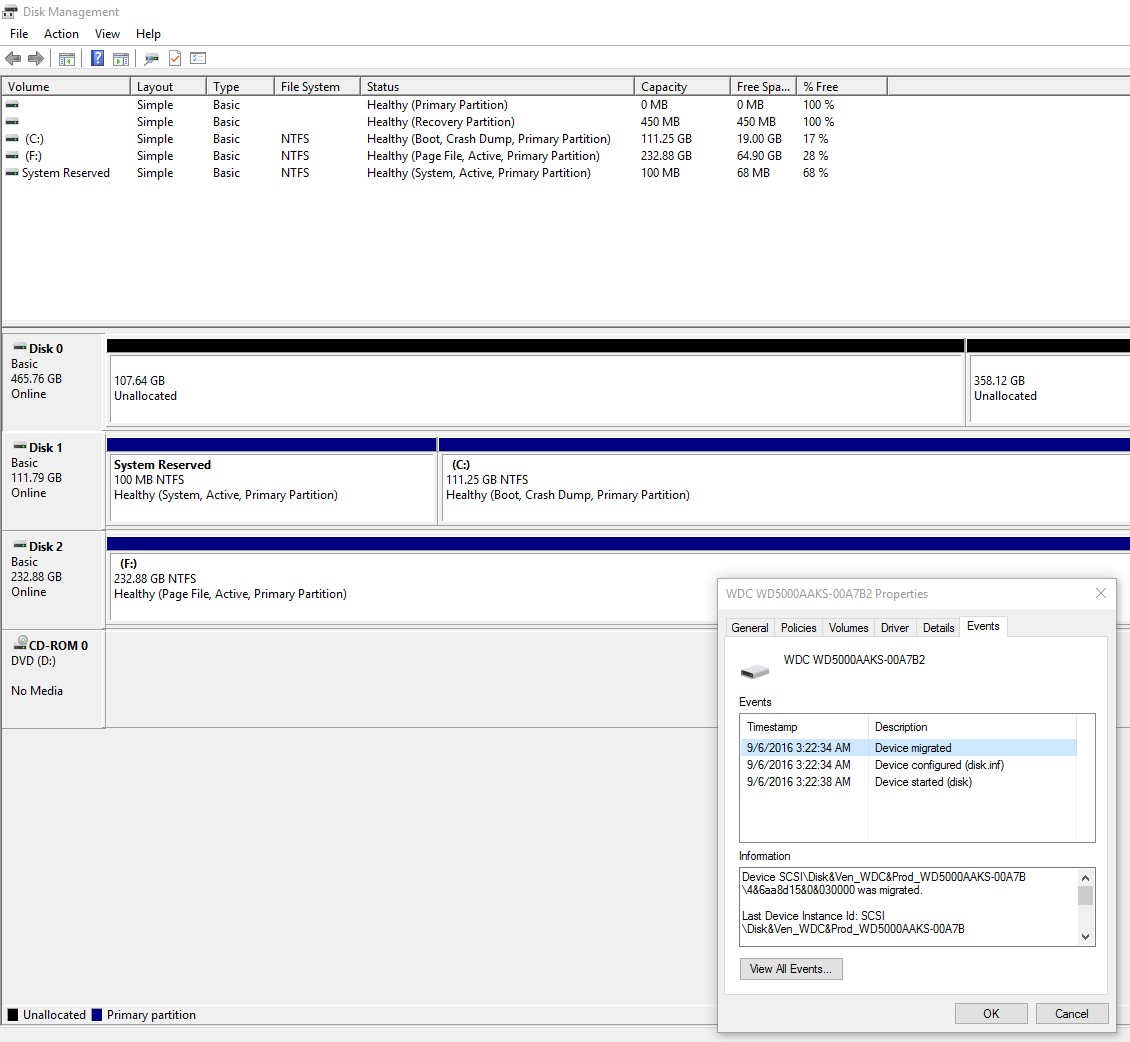 Disk 0 is the affected drive; it used to be my Disk E:, and it stored all my personal files, but it was not my boot drive for Windows 10. I have the most important of these backed up, and with TestDisk I can recover the data from the old partition, but I I’d like to get the whole partition back if possible and prevent this from happening in the future.

I have no idea how this could happen, but I can list off recent things I did to the PC, in this order:

SMART reports the drive is fine. The change happened at some point while the computer was up and running; the E drive just quietly was repartitioned and is now unreadable to Windows.

How can I go about attempting to repair and/or prevent this from happening to another of my drives? Should I attempt to mount the drive in a liveCD environment that can read linux FSes? I can find the old FS using TestDisk and recover files off of the partition, but because the partition type TestDisk autodetected was “none” I can’t seem to restore my old (NTFS) partition.

Please help! Let me know if you need to know anything else about my system or the event.

There is no evidence above that it turned into a LINUX partition.

Ofcourse there is risk involved, but you could always boot a linux distro, getva root shell and use fdisk -cu /dev/xxxx (ie Linux mapping of that drive) and change the partition type for the bad partition to ntfs (something like typing p(enter)1(enter)87(enter)w(enter) to change partition 1 to type 87 =ntfs and write the change to disk.

So I think I found most of the answer. This probably doesn’t need a prevention listed, because I think it was kind of a one-off thing. The drive which was overwritten USED to be an old Windows 7 drive, but I reused it as a mass storage device without reformatting it completely; I just deleted all the windows files and such – this was possibly the source of the problem.

Later on, during my Windows 10 initial upgrade, I did notice the installer said I had two windows 7 installs present on my system; this wasn’t true – I only had one, which I was replacing, on my SSD. My best guess for the cause of this mishap was that somehow during the upgrade from Windows 10 to Windows 10 Anniversary Edition, Windows 10 began to think that it needed to upgrade the other disk as well, and things got…borked.

The solution ended up being MiniTool Partition Wizard Free, because for whatever reason its partition recovery tool was able to restore my old partition with no data loss. Indeed, I even found a highly questionable Windows10Upgrade folder with some kind of 6gb .esb file in it which hadn’t been there before, leading me down the twisted road to blaming the Anniversary Update for these shenanigans.

Now you all know, but really this is more like mysticism than science.