Recently I received my hard drive (LaCie) that I’ve sent away for warranty, my disk failed, and I used Palimpsest Disk utility to check if anything was wrong in the S.M.A.R.T Status. And it said that there were a few broken sectors. So the next day, I went to the store and told the story.

4 weeks later I actually got my drive back. The first thing I did was plugging it in and starting the disk utility, and weirdly it showed me pretty much the exact same things, even the values of most tests were the same as they were before when my drive broke. The serial number is different though, but it does show a very peculiar value.

Now I’m wondering, I’m almost sure it’s the exact same drive and it still says I’ve got broken sectors, does it just say that because it has been cached in the drive somewhere while LaCie DID actually fix it? Or should I run the extended self test (which seems to take hours) first?

The picture of the Disk utility: 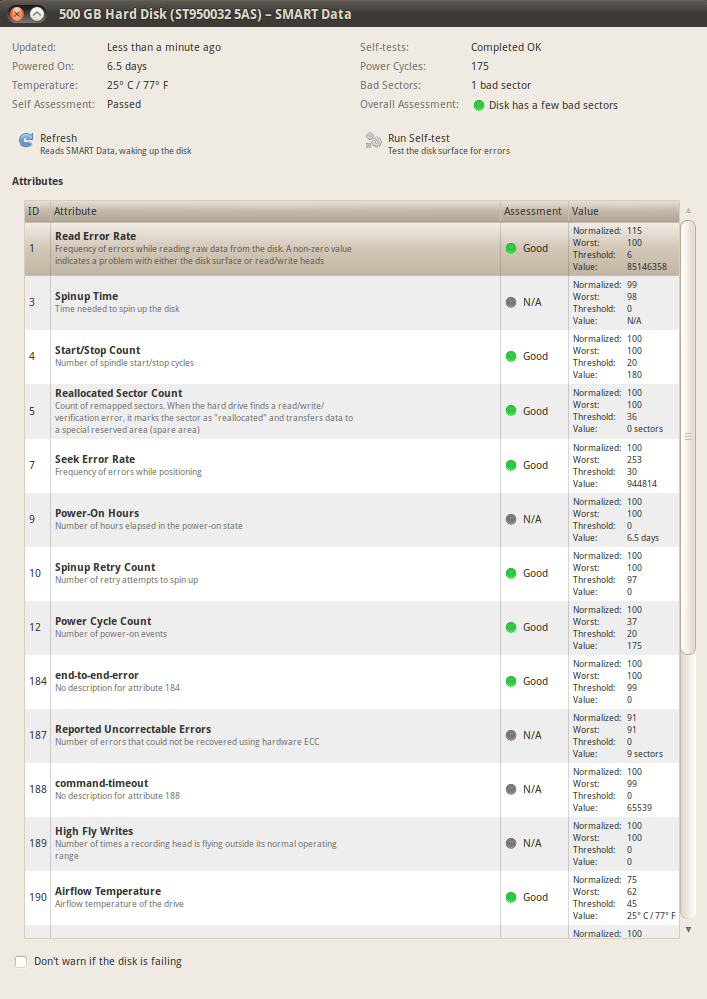 Since the Reallocated Sector Count shows zero reallocated sectors, I’d try an extended self-test and see if it clears a flag that got stuck for whatever reason. The Powered On and Power Cycles fields seem to indicate that you do, indeed, have a new drive.

It might be the case that your software is caching the value; try uninstalling the software, deleting the installation and data folders, and reinstalling. You could also try to find another separate SMART diagnostics program, or check the drive on a different computer.

Update: I’ve had trouble getting smartmontools to work with USB drives in the past. Apparently, many USB drives are not properly supported:

Depending on the type of interface being used, some S.M.A.R.T.-enabled motherboards and related software may not communicate with certain S.M.A.R.T.-capable drives. For example, few external drives connected via USB and Firewire correctly send S.M.A.R.T. data over those interfaces. With so many ways to connect a hard drive (SCSI, Fibre Channel, ATA, SATA, SAS, SSA, and so on), it is difficult to predict whether S.M.A.R.T. reports will function correctly in a given system.

Is it possible that they replaced the circuit board on the drive but didn’t “fix” the platters? If so then they likely replaced whichever ROM stores the serial number but the bad sectors would remain.

IMHO: It’s not worth “fixing” a bad disk drive for reuse. I would never trust it with data after any type of hardware failure.