As you see from the / in the title, this question can be asked in two different ways.

I have a Windows installation and huge plenties of disk space in H: partition. I also have Linux that maps the same huge plenties of space in /mnt/HYPERVISOR. I would like VirtualBox to stay in sync between the two OSes. When I create a VM in Linux I want to see it in Linux and vice versa.

Currently, I can easily create the virtual drive on H: but then I have to recreate the virtual machine with the same configuration in Linux and map the previous hard drive. It’s not that overhead simply because two machine xml descriptors are created and maintained independently, but I’m lazy 🙂

In order to actually share VM configurations (and lose capability to share folders because Windows paths are necessarily different from Linux paths) I’d like VirtualBox to store xml descriptors in H: / /mnt/HYPERVISOR so whatever OS starts it reads configuration from there.

Also, OSes cannot access each other’s system drive because of encryption. C: is BitLocked, / is LVM, but H: is TrueCrypted and automounted via script.

How can I tell VirtualBox to store machine descriptors in a different directory than ~/.VirtualBox?

First expression of the question (“sharing between OSes”) is impossible.

The .vbox xml file containing machine description contains hardcoded paths. Unless exporting to OVF, the machine must be recreated with the same settings. Fortunately, you can always reuse the VHD, which is the most precious resouce in terms of disk space overhead.

Second expression of the question (“change directory”) is very easy. Useful for keeping VMs away of a to-be-formatted partition.
I’ve been really dumb not to seek in the most obvious place: Preferences 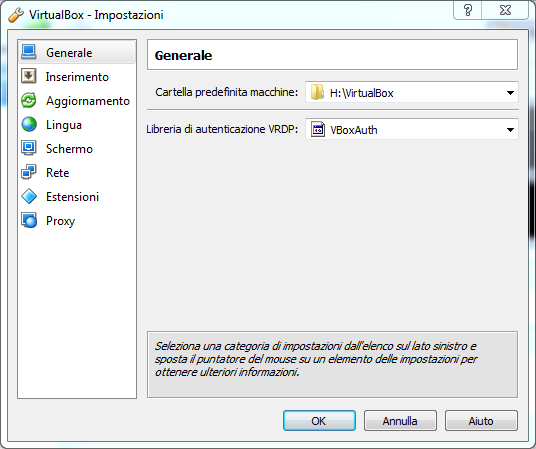 Unfortunately the screenshot is localized. If anybody shoots a printscreen of an English VirtualBox please replace this with yours, but posterity should understand where to look for the option