My knowledge on this subject is very poor. I might not be using correct terms. Please excuse.

ISP’s fiber cable comes to a common area in the apartment complex. There’s an ONT or something similar wherein it gets plugged. The other side is LAN from where a LAN cable drops into my house and goes into the WAN port of my router. I only manage and control my router.

ISP will lay a fiber directly to my house and will provide me a WiFi router that will take in this fiber cable and provide WiFi and Lan connectivity. If there’s anything like ONT it might be inside this router. I am calling this device Fiber Router.

I do not want to use ISP provided fiber router. I want to use my own router that has WAN port in Router Mode (not AP).
After searching the net I came across this diagram (image sourced from Quora.com) 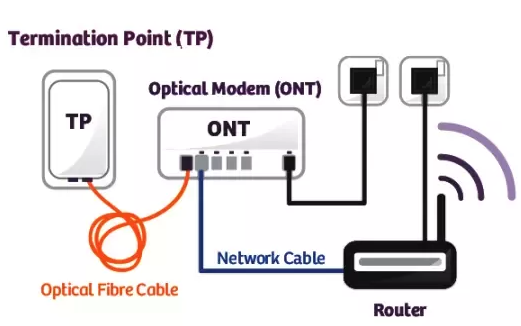 That raises a few basic queries in my mind

I need to convince my ISP for such a setup. They might not agree so I am trying to get better tech understanding of this setup hence the question. I understand that the sourcing of such device, I will leave it to ISP or seek their approval for compatibility.

While I understand that some devices support Bridge mode, the issue is my ISP says I will get any router (I have no choice) between what they have sourced. One is Huawei and another is Nokia. models number might vary as well. They will not care if there’s Bridge mode or not. Since they are offering router for Free, they have opted for cheapest brands/models and some might not even have 5Ghz.

Looks ok, but somewhat overcomplicated setup. You can feed ISP WiFi router LAN output directly to your WiFi router WAN input. However this way you end up with 2 WiFi routers.

Are there any strong arguments against replcing separated modem + your WiFi router with an integrated modem WiFi router from your ISP? Presumably you should be able to configure ISP router in a similar way as your current router.

In case ISP WiFi router is not acceptable, you should be able to switch off WiFi on ISP router and only use LAN connection to your own WiFi routers WAN port.

Is the above setup or something similar I need?

Do I need an ONT between fiber and WAN port router?

If your fiber Internet connection is using GPON technology (as opposed to “plain old” fiber Ethernet), then yes, you need an ONT (aka ONU) as it’s the device which actually understands how to connect to a GPON network.

(GPON is a passive/broadcast type network, not point-to-point, so there are complexities involved – the ONT keeps track of its timing slots for sending data and decryption keys for receiving.)

Note that each ONT has to authenticate to the network (as the ISP can’t just directly associate the physical line to a single customer) and there is no guarantee that your ISP will let you connect just any random device.

Many ISPs issue “fiber modems” which are combined ONTs+routers, but the ONT doesn’t need to be a router – its primary job is just to be a fancy media converter, and it can act as a pure layer-2 bridge to the ISP’s “WAN” network. My local ISP always provides them as two separate devices and allows any router to be connected to the ONT’s Ethernet port (directly obtaining a public IP address via DHCP).

Does that ONT require any configuration or is it just plug n play?

As far as I know, there are several ways that the ONT can be authenticated: by its serial number (unchangeable); by serial number + password; or by LOID (changeable) + password. So it is possible that the ISP might ask you to enter a specific password and/or LOID into the ONT.

(Some ISPs don’t use ONT authentication and will want router-level PPPoE configuration instead.)

Note that my experience with this type of network is very limited.