I have a speakerphone (Jabra Speak 510) connected via USB to my computer (Windows 8.1).

There are some specific web pages (very few) which interfere with the speakerphone (like the sound of a modem, but faster and more high-pitched) when I open them (I do not have any example but will update the question if I stumble upon one – there is nothing fancy in the pages, though). The noise is only during the rendering of the pages (so it is very short and stops when the page is loaded).

What could be the cause of such a weird interference (I am wildly guessing that there are on these pages some elements which interfere with the USB port?).

Judging from your description, this could be caused by DPC latency issues, which may very well occur when using a USB audio interface only.

On my company laptop, I frequently experience stutter, cracks and pops, when scrolling webpages while listening to music (in my case via the headphone output).

Try installing LatencyMon and run it for a while and try and trigger the sound problems. This may help you identify the culprit.

It will tell you on the main screen, if it detects potential latency issues: 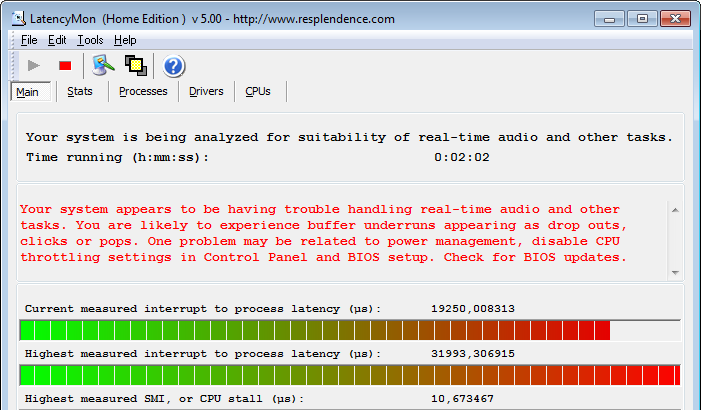 It will also show a bar chart for the “highest reported DPC routine” and the associated driver.

Check out Sweetwater’s guide Solving DPC Latency Issues for hints for some specific drivers, or the DPC tag here on SuperUser for additional general troubleshooting hints.

There is no logic behind a Web page directaly effecting the functions of a USB port. (software isn’t always logical though 🙂
There is no direct link to the 2 as you probably know. some process or some driver or the communications across a bus for delivering that data is not keeping up with the 2 tasks Plus the layers of tasks the system is doing, and any other software.

A web page could have more extensive junk , activity , mass scripting, greater cpu effort, high GPU effort, or even bog down aspects of the computer via the downloading just due to the priority given to net processes and drivers. High use of ram, and even higher use of ram by some browsers.

From your description I am logicaly visualising that a data stream for the audio is balked, because it is a compressed audio stream, if a few bits change it becomes screaching noise. When the load on whatever aspect of the computer drops back down to normal, the data stream continues normally.

Start by analising the simple task manager, or the resource monitor data, where you can visualise the goings on in the computer. It is possible a “latency” testing might show stuff too, because thats what it is good at spotting, things that take to long ,and hog data communications.

There could be some software that you could alter the priority of, it is possible that some changes in various aspecs of how the software uses the system (tweaking a bit) could stop it from happening most times. There might be tweaks in the Browser you use that would reduce the system load, or give other tasks a better chance. There could already be updates. It is possible that other software or even microsofts services are contributing to the whole workload, adding a share of the load.

What make you thinks it is web site casing the effect? Is it reproducible at the certain sites?
Is it a sound like can be heard in speakers sometimes due to mobile phone(s) placing nearby?

It is probably due to electromagnetic fields interference or/and resonance effects at certain frequencies.

In theory, some web pages rendering could lead to a repeatable pattern in the behaviour at the conjunction of software and hardware which may bring some new oscillations and subharmonics to the, particularity, electronics circuit of you phone output cascade. The last can be heard like noises you described.

Besides, do you have a kind of mobile phone or radio communicating device nearby?